END_OF_DOCUMENT_TOKEN_TO_BE_REPLACED

The accelerating expansion of the Universe may not be real, but could just be an apparent effect, according to new University of Canterbury research published in a journal of royal astronomical society.

Dark energy, is usually assumed to form roughly 70% of the present material content of the Universe. However, this mysterious quantity is essentially a place-holder for unknown physics.

Nikola Tesla “a beggar, wrapped in purple, whom ignorant people took for a king.”

He gave us electrical energy to our homes,wireless..

So why does Relativity hold the spot light ..?

“Quasars Are Related to Active Galaxies

The quasars were deemed to be strange new phenomena, and initially there was considerable speculation that new laws of physics might have to be invented to account for the amount of energy that they produced. However, subsequent research has shown that the quasars are closely related to the active galaxies that have been studied at closer distances. We now believe quasars and active galaxies to be related phenomena, and that their energy output can be explained using the theory of general relativity. In that sense, the quasars are certainly strange, but perhaps are not completely new phenomena.”

To be more concise “We now believe quasars and active galaxies to be related phenomena, and that their energy output can be explained using the theory of general relativity”

The quasars have very large redshifts, indicating by the Hubble law that they are at great distances.

to understand that Red shift is more likely to be intrinsic when it comes to quasars.

Modern Astronomy tries to tell us there is a black holde in the middle of Quasars.

It is acually more like a white hole which creates rather than destroys..

What we have here is M87 which is a dominant Galaxy in the Virgo Galaxy cluster, of which we are a part of.

Looking at this from an unconventional view, that red shift is intrinsic and not a product of velocity. It is possible to see that (0.004360) is low compared to its neighbours linked with plasma. M49 (0.003326 ) which is possible to see in the pictures above has a lower redshift than M87 and is believed to be the oldest. Quasar NGC4639 ,which can also be seen in picture above has a redshift of 1018. Which falls in with ejection theory this Quasar being a lot younger than M87 and M49.

M49, with a low redshift, would be the “mother” of the Virgo Cluster. M87, with a slightly higher redshift, would be an early ejection. The compact cluster between M49 and M87 and the quasar 3C273 on the opposite side of M49, both with nearly the same much higher redshift, are likely an ejection pair. As M49 rotated, later ejections spewed out x-ray-emitting material that formed the spiral shape, just as a spinning garden hose throws out a spiral of water.

What is this about ?

Well it is more about  science and less about politics.

“He has earned the Helen B.Warner prize, the Newcomb Cleveland award and the Alexander von Humboldt Senior Scientist Award. For 28 years he was staff astronomer at the Mt. Palomar and Mt. Wilson observatories. While there, he produced his well known catalog of “Peculiar Galaxies” that are disturbed or irregular in appearance.”

He discovered an interesting aspect of Red Shift, which contradicted the BBT. He found some galaxies(lower Red shifted) that emitted quasars that had a high red shifted value. These Quasars were actually attached to their “mother” galaxies, with plasma filaments.

It will start with the radio galaxy ,Cygnus A

This is a classic example of ejection around a high radio source.

From his observations, he found that instead of black holes in the middle of galaxies destroying  matter. He concluded from his observation that galaxies create and have the power to make other galaxies, through quasars and BL Lac objects. The older galaxies such as M49 have companion galaxies, which have a higher redshift because they are younger and have come from M49, ejected initially as Quasars.

Not as the big bang would tell us it is because they are moving away from us faster, than M49.

Stay tuned for some examples.

I found this interesting video on youtube giving a rational answer on the interference signals which the LIGO detector has announced to be gravitational waves.

Ok I am a skeptic already, how do they know they are gravitational waves ?

It seems like anything in the scientific world that has remotely to do with the theory of relativity, anything at all that can be tied in an obscure way. Any chance of it supposedly verifying relativity, once discovered is trumpeted immediately around the world. All through the media, television, radio, you tube, newspapers.

So what is it we know about the instruments used to make this break through ?

“What is interferometer used for? 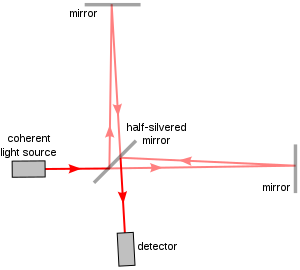 Figure 1. The light path through a Michelson interferometer. The two light rays with a common source combine at the half-silvered mirror to reach the detector. They may either interfere constructively (strengthening in intensity) if their light waves arrive in phase, or interfere destructively (weakening in intensity) if they arrive out of phase, depending on the exact distances between the three mirrors.

Interferometry is a family of techniques in which waves, usually electromagnetic, are superimposed in order to extract information about the waves.

Great so what I can guess about this instrument, it  is a laser version of the Michelson interferometer. Where mirrors are used to bounce the beam around and any change of the beam is picked up by the detector.

The Ligo detector has been going since 2002, it has been overhauled. Nothing has been found until yesterday. So there is interference in the laser beam, is it a gravity wave, could it be something else?

I await a rational answer on this, will keep you posted.

Current models of how stars evolve lack magnetic fields as a fundamental ingredient.

An international group of astronomers led by the University of Sydney has discovered strong magnetic fields are common in stars, not rare as previously thought, which will dramatically impact our understanding of how stars evolve.

Using data from NASA’s Kepler mission, the team found that stars only slightly more massive than the Sun have internal magnetic fields up to 10 million times that of the Earth,

Because only 5-10 percent of stars were previously thought to host strong magnetic fields, current models of how stars evolve lack magnetic fields as a fundamental ingredient,” Associate Professor Stello said. “Such fields have simply been regarded insignificant for our general understanding of stellar evolution.

“No amount of experimentation can ever prove me right; a single experiment can prove me wrong.” Albert Einstein.

Yes they may sound a little incredible but it is true.

Researchers at the Delft University of technology, have discovered quantum entanglement. Something which relativity says is not possible, due to the cosmic speed limit imposed by Albert.

Two electrons 1.5km away were found to “communicate” in less than the speed of light.

Could this be an end to science dominated by relativity ? I sure hope so.