What is this about ?

Well it is more about  science and less about politics.

“He has earned the Helen B.Warner prize, the Newcomb Cleveland award and the Alexander von Humboldt Senior Scientist Award. For 28 years he was staff astronomer at the Mt. Palomar and Mt. Wilson observatories. While there, he produced his well known catalog of “Peculiar Galaxies” that are disturbed or irregular in appearance.”

He discovered an interesting aspect of Red Shift, which contradicted the BBT. He found some galaxies(lower Red shifted) that emitted quasars that had a high red shifted value. These Quasars were actually attached to their “mother” galaxies, with plasma filaments.

It will start with the radio galaxy ,Cygnus A

This is a classic example of ejection around a high radio source.

From his observations, he found that instead of black holes in the middle of galaxies destroying  matter. He concluded from his observation that galaxies create and have the power to make other galaxies, through quasars and BL Lac objects. The older galaxies such as M49 have companion galaxies, which have a higher redshift because they are younger and have come from M49, ejected initially as Quasars.

Not as the big bang would tell us it is because they are moving away from us faster, than M49.

Stay tuned for some examples.

Current models of how stars evolve lack magnetic fields as a fundamental ingredient.

An international group of astronomers led by the University of Sydney has discovered strong magnetic fields are common in stars, not rare as previously thought, which will dramatically impact our understanding of how stars evolve.

Using data from NASA’s Kepler mission, the team found that stars only slightly more massive than the Sun have internal magnetic fields up to 10 million times that of the Earth,

Because only 5-10 percent of stars were previously thought to host strong magnetic fields, current models of how stars evolve lack magnetic fields as a fundamental ingredient,” Associate Professor Stello said. “Such fields have simply been regarded insignificant for our general understanding of stellar evolution.

“No amount of experimentation can ever prove me right; a single experiment can prove me wrong.” Albert Einstein.

Yes they may sound a little incredible but it is true.

Researchers at the Delft University of technology, have discovered quantum entanglement. Something which relativity says is not possible, due to the cosmic speed limit imposed by Albert.

Two electrons 1.5km away were found to “communicate” in less than the speed of light.

Could this be an end to science dominated by relativity ? I sure hope so.

The Sun is an active electrical star.

The sounds of the Sun AUDIO from

Sunspots It happens down by the surface probably beneath. But what it causes on the surface is quite astonishing. Sunspots are the visible counterparts of magnetic flux tubes.  Sunspots come in pairs with opposite magnetic polarity. From cycle to cycle, the polarities of leading and trailing (with respect to the solar rotation) sunspots change from north/south to south/north and back. Sunspots usually appear in groups. In 2001, observations from the Solar and Heliospheric Observatory (SOHO) using sound waves traveling below the Sun’s photosphere (local helioseismology) were used to develop a three-dimensional image of the internal structure below sunspots; these observations show that there is a powerful downdraft underneath each sunspot, forming a rotating vortex that concentrates the magnetic field.

The sunspots often form plasma loops, which are also called Coronal loops. The process feeds the corona with chromospheric plasma and powerful enough to accelerate and therefore heat the plasma from 6000 K to well over 1 MK over the short distance from the chromosphere and transition region to the corona. Coronal loops, Sunspots create this phenomenon from magnetic flux.

Solar flares “The high magnetic fields in the sunspot-producing active regions also give rise to explosions known as solar flares. When the twisted field lines cross and reconnect, energy explodes outward with a force exceeding that of millions of hydrogen bombs.

Temperatures in the outer layer of the sun, known as the corona, typically fall around a few million kelvins. As solar flares push through the corona, they heat its gas to anywhere from 10 to 20 million K, occasionally reaching as high as a hundred million. According to NASA, the energy released in a solar flare “is the equivalent of millions of 100-megaton hydrogen bombs exploding at the same time.” Coronal mass ejections The magnetic field lines that twist up to form solar flares occasionally become so warped that, like rubber bands under tension, they snap and break, then reconnect at other points. The gaps that form no longer hold the sun’s plasma on its surface. Freed, the plasma explodes into space as a coronal mass ejection (CME). 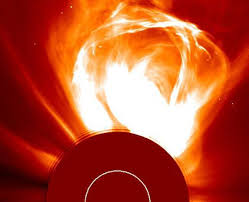 It takes several hours for the CME to detach itself from the sun, but once it does, it races away at speeds of up to 1,000 km (more than 7 million miles per hour). The cloud of hot plasma and charged particles may be up to 100 billion kilograms (220 billion pounds) in size. Credit Magnetic storms of the Sun. 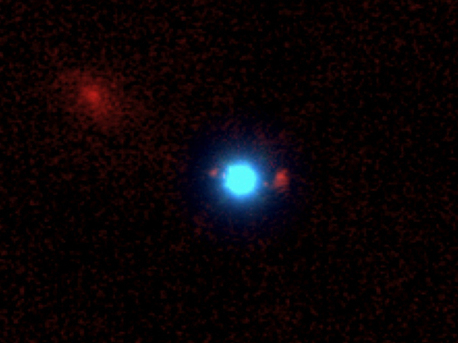 Quasars , what the heck are they ?

Quasistellar objects, or quasars, were defined originally as star-like objects of large redshift. Today,
quasars are considered to be the most luminous members of the general class of objects called active galactic nuclei, or AGNs. Quasars are the brightest objects in the universe

We know about quasars because of observations from telescopes.

They are highly luminous and active, from which grow into active galaxies.

There is a lot of activity going on these quasars, matter formation, star creation.

We google Quasars and get from Wiki

“Quasars or quasi-stellar radio sources are the most energetic of a class of objects called active galactic nuclei (AGN). Quasars are extremely luminous and were first identified as being high redshift sources of electromagnetic energy, including radio waves and visible light, that appeared to be similar to stars, rather than extended sources similar to galaxies. Their spectra contain very broad emission lines, unlike any known from stars, hence the name “quasi-stellar.” Their luminosity can be 100 times greater than that of the Milky Way.”

Which is basically telling us, these things pump out energy !!

Then it all turns pear shaped with the media and Astronomy, they go on to say, as if on the drive for research dollars. “Most quasars were formed approximately 12 billion years ago caused by collisions of galaxies and their central black holes merging to form a supermassive black hole.”

A classic example of this is microquasar IGR J17091-3624. Once again if we look the IGR number up we get, from Wiki a Black hole and you may find in a  number of science article they refer to this system as proof of a black hole !

Is there any rational discussion about this system going on ?

Well yes but I suppose it depends how far you want to venture down the rabbit hole. Well it didn’t take me long and I found.

“Microquasar IGR J17091-3624 exhibits faint, quasi-periodical outbursts of the period between 5 and 70 seconds and regular amplitudes, frequently referred to as the
’heartbeat state’. ”

Quasars what are they ?

All of the evidence suggests that these QSOs have been ejected from z p 1.25
Arp 220 and have large intrinsic redshifts.

Well they are not black holes.

Starts with Cygnus A.

Halton Arp himself talking about his discoveries.

“The distribution on the sky of clusters of galaxies started to be cataloged about 40 years ago by George Abell and collaborators. The cores of these clusters were predominantly old stellar population E galaxies which were believed to be mostly gas free and inactive. With the advent of X-ray surveys, however, it became evident that many clusters of galaxies were strong X-ray emitters. This evidence for non-equilibrium behavior was not easily explained. In these active properties, however, the clusters joined AGN’s and quasars as the three principal kinds of extragalactic X-ray sources. Evidence then developed that quasars, and now some galaxy clusters were physically associated with much lower redshift galaxies. Surprisingly, the cluster redshifts were sharply peaked at the preferred quasar redshifts of z = .061, .30 etc. (This evidence has been discussed principally in Arp 1997; 1998a; Arp and Russell 2001).”

The Maunder Minimum,is the name used for the period starting in about 1645 and continuing to about 1715 when sunspots became exceedingly rare, as noted by solar observers of the time. also known as the “prolonged sunspot minimum”. Or otherwise known as a time the sun goes to sleep in the solar cycle. The great famine of 1693-1694 is due to a severe winter in 1692 in France. Earth is 15 years from a “mini ice age” that will cause bitterly cold winters during which rivers freeze over, scientists have predicted. Solar researchers at the University of Northumbria have created a new model of the sun’s activity which they claim produces “unprecedentedly accurate predictions”. They said fluid movements within the sun, thought to create 11-year cycles in the weather, will converge in such a way that temperatures will fall dramatically in the 2030s. Solar activity will fall by 60 per cent as two waves of fluid “effectively cancel each other out”, according to Professor Valentina Zharkova. In a presentation to the National Astronomy Meeting in Wales, she said the result would be similar to freezing conditions of the late 17th century. “[In the cycle between 2030 and 2040] the two waves exactly mirror each other – peaking at the same time but in opposite hemispheres of the sun,” she said. Maunder minimum, indicating low sunspot activity, was the name given to the period between 1645 and 1715 when Europe and North America experienced very cold winters. In England during this “Little Ice Age”, River Thames frost fairs were held. In the winter of 1683-84 the Thames froze over for seven weeks, making it “passable by foot”, according to historical records. News on the solar sleep

Mini ice age on its way

This new image of filament G49 reveals how matter is distributed across our Milky Way galaxy.

New images of huge filamentary structures of gas and dust from the Herschel space observatory reveal how matter is distributed across our Milky Way galaxy. Long and flimsy threads emerge from a twisted mix of material, taking on complex shapes.

This image shows a filament called G49, which contains 80,000 suns’ worth of mass. This huge but slender structure of gas and dust extends about 280 light-years in length, while its diameter is only about 5 light-years across.

In this image, longer-wavelength light has been assigned visible colors. Light with wavelengths of 70 microns is blue; 160-micron light is green; and 350-micron light is red. Cooler gas and dust are seen in red and yellow, with temperatures as low as minus 421 degrees Fahrenheit (minus 252 degrees Celsius).

In the densest and coolest clumps, the seeds of new generations of stars are taking shape. A brighter clump of matter is visible at the left tip of the wispy thread.

This filament is about 18,000 light-years away. The image is oriented with northeast toward the left of the image and southwest toward the right.

Herschel is a European Space Agency mission, with science instruments provided by consortia of European institutes and with important participation by NASA. While the observatory stopped making science observations in April 2013, after running out of liquid coolant as expected, scientists continue to analyze its data. NASA’s Herschel Project Office is based at NASA’s Jet Propulsion Laboratory, Pasadena, California. JPL contributed mission-enabling technology for two of Herschel’s three science instruments. The NASA Herschel Science Center, part of the Infrared Processing and Analysis Center at the California Institute of Technology in Pasadena, supports the U.S. astronomical community. Caltech manages JPL for NASA. 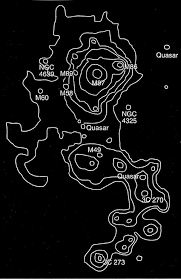 A fantastic read for anyone interested in cosmology. A must

His work with quasars and red shift, is quite astounding. The clearly visible filaments attached between a quasar and it’s parent galaxy. Such a relief to see he disputes the big bang but sounds like it was quite taxing on his career, hence this book and the truths he has in them backed up with real evidence. 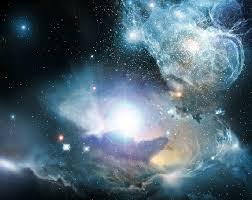 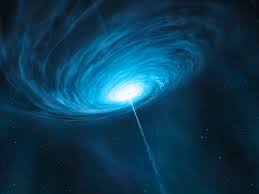