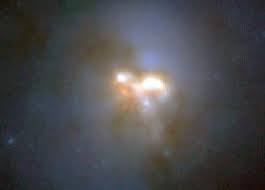 The galaxy Arp 220 is home to several giant star clusters—about 10 million solar masses—that are twice as massive as any comparable star cluster in the Milky Way Galaxy. McMaster University’s Christine Wilson is captivated by this turbulent galaxy that provides such a target-rich environment for watching stars form.

A little bit more about Arp 220 and apparently scientists have discovered amino acids there, you will have to excuse the talk of colliding galaxies.

The most important thing about this system is not that is 2 colliding galaxies because this is what it is not, it is more like a growing system creating matter.

Quasi-Stellar Objects (QSO)                                 “we have found two pairs
of QSOs, one pair of objects at almost exactly the same angular distance from Arp 220 with redshifts that differ only by less than and a second pair at distances of 29 z p 0.009 .8 and 43.1,
respectively. As far as the first pair is concerned, the similarity of the redshifts and the fact that they lie along an axis through the nucleus of Arp 220 and are at roughly the same distance in opposite directions makes it highly unlikely that this is an accidental configuration.

The most likely explanation is that all four of these QSOs are physically associated with Arp 220 and have been ejected from it, so the redshifts are largely intrinsic in origin.