Black holes are everywhere according to media reports.

“Don’t let the name fool you: a black hole is anything but empty space. Rather, it is a great amount of matter packed into a very small area – think of a star ten times more massive than the Sun squeezed into a sphere approximately the diameter of New York City. The result is a gravitational field so strong that nothing, not even light, can escape. In recent years, NASA instruments have painted a new picture of these strange objects that are, to many, the most fascinating objects in space.”

Yes because black holes are based on theoretical physics not actual real empirical physics.

So let us again look at the nature of black holes “The result is a gravitational field so strong that nothing, not even light, can escape.”

Well I assume that means gas as well, as I am sure the oxygen is held to the earth with its weak gravity.

So nothing can escape a black hole.

But instead observations from Active Galactic Nuclei suggests that matter is being continually ejected.

All galaxies according to science fairies have black holes in them.

Nasa then says this about the ejection and black holes

”  Before it falls in the gas becomes incredibly hot, so hot that it emits X-rays, Some of that gas doesn’t fall into the black hole but instead is shot out as ‘jets’ of hot gas.”

Ok so black holes have a gravity so strong light cannot escape, but x rays and hot gas can.

Sounds like a story to me, there hasn’t been one proven yet.

The Maunder Minimum,is the name used for the period starting in about 1645 and continuing to about 1715 when sunspots became exceedingly rare, as noted by solar observers of the time. also known as the “prolonged sunspot minimum”. Or otherwise known as a time the sun goes to sleep in the solar cycle. The great famine of 1693-1694 is due to a severe winter in 1692 in France. Earth is 15 years from a “mini ice age” that will cause bitterly cold winters during which rivers freeze over, scientists have predicted. Solar researchers at the University of Northumbria have created a new model of the sun’s activity which they claim produces “unprecedentedly accurate predictions”. They said fluid movements within the sun, thought to create 11-year cycles in the weather, will converge in such a way that temperatures will fall dramatically in the 2030s. Solar activity will fall by 60 per cent as two waves of fluid “effectively cancel each other out”, according to Professor Valentina Zharkova. In a presentation to the National Astronomy Meeting in Wales, she said the result would be similar to freezing conditions of the late 17th century. “[In the cycle between 2030 and 2040] the two waves exactly mirror each other – peaking at the same time but in opposite hemispheres of the sun,” she said. Maunder minimum, indicating low sunspot activity, was the name given to the period between 1645 and 1715 when Europe and North America experienced very cold winters. In England during this “Little Ice Age”, River Thames frost fairs were held. In the winter of 1683-84 the Thames froze over for seven weeks, making it “passable by foot”, according to historical records. News on the solar sleep

Mini ice age on its way

Well it gives us life from the energy it throws our way, photosynthesis for plants and vitamin D for us. 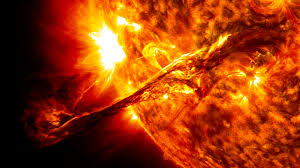 It has been worshiped throughout the ages.

What do we really know about it ?

A quick google search will tell you hydrogen and helium and a light sprinkling of metals.

Let us instead talk about what we do know for a fact about our star.

The surface of the Sun that we typically see from Earth is the photosphere which is a brightly radiating layer of plasma only about 500 km thick. It is analogous to the ‘anode glow’ region of a laboratory gas discharge experiment

The temperature of the surface of the sun fluctuates according to the activity on the surface, but an average temperature of 5,500 degrees C has been obtained for the photosphere. This is not in the  millions or even hundreds of thousands. No you heard me 5500 C. Temperatures this hot have been made on earth.

The chromosphere is the innermost atmospheric layer. It is just above the photosphere. Here the temperature begins to rise again, to about 20000 degrees C

The Corona of the sun is hotter still, The corona can get about 2 million degrees C.

The composition and mechanical inner workings of the sun beneath the visible photosphere have remained an enigma for thousands of years. There are a whole host of unexplained phenomena related to the sun’s activities that still baffle gas model theorists to this day because they fail to recognize the existence of an iron alloy transitional layer that rests beneath the visible photosphere. Fortunately a host of new satellites and the field of heliosiesmology are starting to shed new light on this mysterious “stratification subsurface” layer of the sun that is located about 4800km beneath the visible photosphere. In addition, recent studies of solar wind suggest that solar wind also originates on the same transition layer under the photosphere as do the electrically charged coronal loops. NASA’s SOHO satellite and the Trace satellite program have both imaged this transition layer of the sun that sits beneath the photosphere. These 21st century satellites and technologies now enable us to peer behind the outer plasma layers of the chromosphere and photosphere and allow us to study the rocky, calcium ferrite transitional layer with incredible precision.

The running difference imaging technique used by both NASA and Lockheed Martin have revealed to us for the first time that the sun is not simply a ball of hydrogen gas in space; it has a hard and rigid ferrite surface below the visible photosphere

The surface can also be seen in raw satellite images. This close up standard image of the surface layer is provided by Trace using its 171 angstrom filter. This close up image shows remarkable surface detail and also shows a close up view of the solar wind created from the electrical arcs. These arcs create streamers as they travel through the sun’s outer atmosphere of mass separated plasmas.

The same remarkable surface detail is still clearly visible in the transitional region two and half minutes later although the lighting has changed slightly due to changes in the electrical arcs coming from the surface. Unlike in the running difference images, in “standard” close up images we can also see the base of the electrical arcs as they rise off the surface into the silicon plasma to form the familiar coronal loop patterns seen in the upper atmosphere.”

Electricity clearly has a significant role.

In this day and age there is no longer any doubt that electrical effects in plasmas play an important role in the phenomena we observe on the Sun.

Most of the space within our galaxy is occupied by plasma (rarefied ionized gas) containing electrons (negative charges) and ionized atoms (positive charges). Every charged particle in the plasma has an electric potential energy (voltage) just as every pebble on a mountain has a mechanical potential energy with respect to sea level.

The Sun is at the center of a plasma cell, called the heliosphere, that stretches far out – several times the radius of Pluto. As of 9/9/2012 the radius of this plasma cell has been measured to be greater than 18 billion km or 122 times the distance from the Sun to Earth. These are facts not hypotheses.

The Sun is at a more positive electrical potential (voltage) than is the space plasma surrounding it – probably in the order of several billion volts.
Positive ions leave the Sun and electrons enter the Sun. Both of these flows add to form a net positive current flowing through the Sun (entering at the poles and leaving radially at lower latitudes). This constitutes a plasma discharge analogous in every way (except size) to those that have been observed in electrical plasma laboratories for decades. Because of the Sun’s positive charge (voltage), it acts as the anode in a plasma discharge. As such, it exhibits many of the phenomena observed in earthbound plasma laboratory experiments.

Positive ions stream outward from the Sun’s surface and accelerate away, through the corona, for as far as we have been able to measure. It is thought that these particles eventually make up a portion of the cosmic ray flux that permeates the cosmos. The ‘wind’ varies with time and has even been observed to stop completely for a period of a day or two.

A couple of questions I found that were interesting

what determines the frequency of solar activity?

What makes the out layers of the sun so unstable as to eject flares and cause the coronal loops?

David: It’s all magnetism. The magnetic fields are produced inside the sun by the motions of ionized gases. Those magnetic fields rise thru the surface and can become twisted which results in explosions like flares and coronal mass ejections.

Once again the corporate media has given us more theory regarding the middle of galaxies that doesn’t actually make sense. A Supermassive black hole is at the center of our galaxy. It sounds pretty scary, anyway it has to be right because it is all about gravity and these guys must know what they are talking about.

Our galaxy the milky way has a center which the rest of us spin around. X-ray and radio observations offer the best evidence yet that, as long suspected, high-energy particles stream from the heart of our galaxy. There is also gas being ejected. So we have the center of the galaxy making stuff and energy. The center of the galaxy is shrouded in so much gas and dust that nothing is easy to see there from our perspective on Earth. “There’s basically all the gunk between us and the galactic center, plus a big screen of plasma that is sort of like bathroom shower glass, serving to smear out images because of electron scattering,” says astronomer Sera Markoff of the University of Amsterdam.

You would think that a supermassive black hole would consume vast amounts of material around it and be visible by the absence of material around it. But no, it doesn’t work like this at all. The center of our galaxy is an electrical furnace creating the material and elements found within it. Not a destroyer of matter, as black hole theory would suggest.

Why are we bombarded with back holes when..

They cannot define it as a region of space or an object in space.

They have never seen one and don’t know what they are made of.

They are predicted in gravity theory but sadly to this day have never been proven as fact.